5 Healthy Additions to Your Water

Water is the healthiest thing we can drink. But ca...

Restaurant Report: Who Uses Too Many Antibiotics?

Have you ever heard of the Big Eight? If you have...

Trendy Food and Drinks: What’s HOT for Health and What’s NOT

When it comes to food trends, Americans go wild fo...

Mercury Poisoning in Fish: How to Avoid It

Mercury poisoning in relation to fish is something...

Omega-3s: Why You Need Them and How to Get Them

These days, omega-3s are a big nutritional buzzwor...

Energy bars are everywhere. They line the shelves...

9 High-Fat Foods You Should Eat

Are you up with the times when it comes to fatty f...

Were you a carrot hater as a child? Be honest...

How to Make a Healthy Cup of Coffee

Do you love that morning cup of joe? It’s no...

We often think of cherries when it comes to toppin...

Signs and Symptoms of Iodine Deficiency

Some people call it a “silent epidemic.” And it ju...

7 Reasons Why You Should Be Eating Kiwi Fruit

When it comes to shopping for fruit, the first opt...

7 Reasons Milk Does a Body Good

We’ve all heard the famous phrase “Milk, it does a...

Looking to add superfoods to your life? Look no fu...

Are you allergic to milk?Food allergies are common...

Why Hummus Should Be Your Go-To Food

It’s a tasty treat with pretzels, chips or vegetab...

8 Foods That Improve Your Blood Circulation

Do your hands and arms ever tingle for no apparent...

6 Healthiest Nuts Everyone Should Be Eating

Are you in need of a quick snack? Skip the chips a...

Are you or someone you love allergic to peanuts?Pe...

Best Fish Options for Your Diet

Do you like it raw, poached, grilled or baked? As...

Vitamin E: Why You Need It and Where to Find It

Are you looking to eliminate altitude sickness? Im...

If you’ve ever had a certain vegetable on your pla...

Everything to Know About Vitamin E

5 Great Ways to Get Your Chia Seeds

What You Need to Know About Wheat Germ

The poor wheat germ had it rough for awhile. Despi... 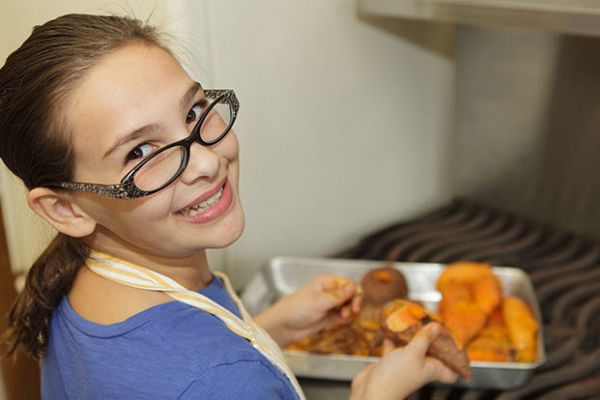 Submitted for your approval: the sweet potato. Known as Ipomoea batatas, it is part of the Convolvulaceae botanical family. The Ipomoea comes from the Greek name for bindweed.

Although white potatoes are the most-consumed vegetable in America, the sweet potato lags behind and is often confused with the common yam, which is actually a different vegetable entirely. Overlooking the sweet potato or confusing it with something else is a mistake because it may just be the world’s most healthful food.

It is a perennial that is grown as an annual and springs forth from underground roots with stems that can be as long as twenty feet. The leaves vary in size, shape and color but usually are green with purple markings. They also produce flowers that are white and pale purple, but these rarely appear.

The orange-colored tuber probably originated in Central or South America, though they no longer grow wild in those regions. It is believed that the sweet potato has been cultivated by those living in the areas for more than 5,000 years, and some fossils in the Andes date the sweet potato to activities dating back 8,000 to 10,000 years. It was the perfect migratory food, compact, nutrition-dense and delicious, which is why people likely carried it with them on their explorations in those early times. It gradually spread from the Americas across the Pacific to New Guinea, Polynesia, Indonesia and New Zealand.

Christopher Columbus brought back sweet potatoes when he first visited the Americas, which spread through Spain and gradually throughout the warmer regions of Europe. They were then brought to the Philippines by Spanish explorers and soon arrived in Africa and the South Pacific, thanks to the Portuguese.